"A human being subject to death is alive neither due to inhalation nor exhalation. Rather, he is alive due to something else that gives life to both inhalation and exhalation." - Katha Upanishad

Introduction to the Why and How of Respiratory Control Techniques

Yoga teaches us that the physical body is the gross materialisation of two subtle bodies: the astral and causal bodies. The physical, astral, and causal bodies are divided into 5 sheaths or layers moving from the most gross to the most subtle: food sheath, pranic or energy sheath, mental-emotional sheath, intuitive sheath, and the bliss sheath.

All these sheaths are deeply connected and function through a network of energy centers within the subtle bodies which have a correspondence with the nerves, nerve plexuses, circulatory and respiratory systems, organs, and endocrine glands of the physical body.

For the moment, we focus specifically on the pranic or energy body, also called the “double etheric” of the physical body. The etheric body surrounds, penetrates, and expands beyond all solid matter, liquid, or gas of the physical body by several centimeters. It functions like a receiving and distributing agent of all energies that animate a human being.

The dense physical body and the double etheric are intimately intertwined; that is to say, in purifying the dense body, we automatically refine the etheric body. The etheric body is also the intermediary between the physical body and the emotional, mental, and intellectual bodies. It is important that these bodies function together in perfect harmony. The etheric body has a very fine invisible atomical texture, but it can become visible and palpable to the sensitively trained.

The sanskrit name of this etheric sheath is Pranamaya Kosha, the layer composed of prana (vital energy). Pranamaya Kosha is made up of a network of nadis (subtle channels) which are 72,000 in number based on the classic text of the Geranda Samhita, and they emanate from the vertebral column.

The nadis intersect and form a luminous thread. Each crossing represents an energetic hub or chakra, the sanskrit word for wheel or turning disc. There are 7 major intersections, 21 minor intersections, and a chakra for each articulation. The energy within the chakras turns in a spiral, and the diameter of the wheel varies plus or minus 5 to 15 cms depending on the state of the person. Open chakras and those functioning well turn in a clockwise direction, and one has a clear perception of oneself and the world around. One will feel assured, calm and peaceful.

One word on the placement and significance of the major chakras. They are located along the vertebral column and open toward the front and back, the first downward and the seventh upward. They relate directly with nervous centers and certain organs of the physical body.

Each chakra represents different states of consciousness. At the practical level, the search for a balanced state of consciousness is of primordial importance for a harmonious development of the human being.

In the network of subtle channels, there are three principal nadis:

The double etheric of the vertebral column and the central nadi of the network. It corresponds to the spinal cord. Within its center, one finds Vajra Nadi, which contains Chitra Nadi, which in turn contains a miniscule canal, Brahma Nadi through which Kundalini (the dormant cosmic force within the human being) rises from the base of the vertebral column to the top of the head.

These 2 nadis surround Shushumna in a sinuous movement from Muladhara to Ajna. They intersect at each major chakra named within the table above. Ida terminates at the left nostril, pingala at the right nostril. They correspond to the sympathetic and parasympathetic ganglions of the physical body. The good functioning of this etheric body depends both on the purity of the network (nadis and chakras) and of that of the respiratory system.

At the base of this purity is a healthy lifestyle with healthy, natural, and nutritious food, good oxygenation, a rhythm of life adapted to the needs of the person: sleep/wake, activity/relaxation, certain breathing techniques, purification techniques called kriyas, the practice of yoga asanas.

When the physical body and the etheric network are purified and strengthened, the true pranayama, control of the vital energy by breath retention (lungs full/lungs empty) and the capacity to direct this energy by thought, can transform the human being into a shining ray of light spreading joy and peace around him.

Before arriving at the true pranayama with long breath retention, the student will have to prepare himself carefully. One cannot force the energy to pass through clogged channels without the risk of setting them on fire. These burnings would be very inauspicious.

Breathing is Fundamental to Life

All people who breathe, live. And according to the breath, live more or less well. It will be useful for us to observe now our habitual breathing patterns. Is the breathing regular, slow, deep, or on the contrary, rapid, superficial, arrythmic, difficult? Where is it that breathing takes place? In the abdomen, the chest, or the shoulders? Can you also feel the breathing in the back?

What role does the diaphragm play? This muscle has a deep and central position in the body. It forms the arch between the thorax and abdominal cavities. With a very physically and mentally relaxed person, the diaphragm moves without restriction, descending toward the abdominal cavity during the inhalation and rising toward the thorax on the exhalation. This movement of expansion and contraction favors the entry and exit of air within the lungs. Breathing leads to movement within the physical and energy bodies, and vitality increases instantly.

It is exactly here where you start your exploration to better know your habitual breathing patterns and, above all, that at the moment of stress. Know that a real stress or even imaginary (fear, phobia, worry, anxiety) induces important changes in the functioning of the body via the brain and glands.

Breathing and the heartbeat as well, both of which are controlled at the level of the cerebral trunk, exit easily from their balanced rhythm with the least impulsion. Adapting to this change, muscles contract to be ready to act and (very often because of our lifestyle full of stimuli) no longer relax.

Tensions remain, breathing rests limited, superficial, jerky, inverted, too rapid, frozen, etc. Such breathing leads to confusion in all the respiratory muscles and eventually chronic tensions in the neck, shoulders, throat, indigestion, difficulty in coordinated movement or having coordinated thoughts.

If the breathing is rapid and superficial, there can be a disequilibrium at the level of the blood composition (lack of CO2) which can bring about an alkalinization of the corporal metabolism. A metabolism too alkaline brings an increase of calcium into the muscles and nerves. These become hyperactive, the muscles tense. A nervous excitation results in premature actions such as hyperactivity, etc.

Our emotions and our attitudes when faced with sensation of pain, pleasure, joy, suffering, temperature, noise, etc. as well as our physical posture and our movements have a big influence on the breathing and vice-versa.

It is of major importance to harmonize respiratory movement by fundamental breathing.

Diaphragmatic or abdominal breathing. It uses and aerates the lower part of the lungs. During inhalation, the breath rises in a hardly perceptible way in the space between the navel and the stomach. During exhalation, this same region gently returns. The middle and higher ribs stay immobile. This is the resting breath, of serenity, and of attention. This breath relaxes intellectual activity and greatly helps one to enter into a meditative state. With it, one also learns how to use the diaphragm, to give it suppleness and life.

Complete respiration. It uses and activates the totality of the lungs without brutally forcing their capacity. It includes abdominal breathing, thoracic breathing, and clavicular breathing. During inhalation, the lower region of the lungs fills first as in abdominal breathing, then the thoracic region (floating, lower, middle, and upper ribs) fills, and finally, the clavicular region fills terminating with the intake of air. During exhalation, the same process, starting with the lower lungs (adbominal depression) then emptying the thoracic and clavicular regions with the expulsion of air.

This practiced breathing in a slow and profound way is very beneficial to improve health. To work progressively to grow lung capacity and thoracic opening and closing.

Nadishodana. It is the base of true pranayama. It cleanses the vital conduits of all chakras. Breathing is slow and alternating, using one nostril after the other. It is a harmonizing breath.

Note. All breathing exercises can be accompanied by mudras, energy seals which are pregnant of symbolic significance and channel the energy. 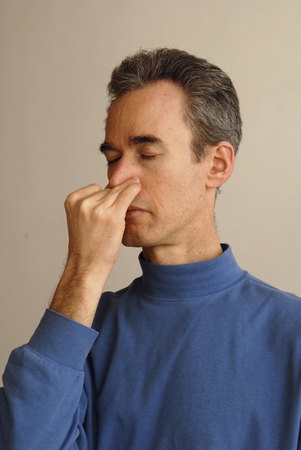 Nadishodana employs the use of 2 mudras: right hand in vishnu mudra; left hand in either jnana or chin mudra.

Vishnu mudra: the right hand in front of the face, index and middle fingers toward the palm of the hand, thumb and ring finger opening and closing alternately the right and left nostrils.

Jnana mudra: the end of the left index finger touches the tip of the thumb or the thumb’s first knuckle; the back of the hand rests on the knee, palm upward, the other fingers lengthened.

These 3 breathing practices can be done with breath retention. It is preferable at the same time to be very vigilant and to use the breath retentions with caution, their positive or negative repercussions manifesting as well on the physiological and psychological levels.

Breath retentions with lungs empty or full changes the relation between oxygen and CO2, thereby changing the level of oxygenation and affecting the blood circulation. The breath retentions must not create fatigue nor bring about shaking, dizziness, pressure in the head, nor abnormal heat. These are alarm signals of the body, stop at once.

After deep integration of these simple but fundamental breathing techniques, a more intense work can be done utilising bandhas. With the utilisation of bandhas: Jalandhara bandha or chin lock, Uddiyana Bandha or abdominal lock and Mula Bandha or root lock, one enters into the true pranayama, that is to say, the control and manipulation of the energy.

Using and deepening the 3 breathing practices mentioned in adding a spiritual thought and attitude. Let your soul inhale, let your soul exhale. Through the inhalation and exhalation, let the divine awaken within you and humbly welcome the Creator in you with each breath.

Thus, your breathing, transported by this thought, will put the energy (prana, chi) in movement to nourish your energy centers and the most simple breathing will become the source of happiness, inspiration, and blossoming.